Tweedy and the Beach...sounds like a title to a cartoon

Last Wednesday we were in the presence of greatness...WILCO. It was a great concert...minus some of the totally crazy drunks. Tweedy said we were the "highest" group he has every played for. Notice the haze...
We are all Wilco fans at our house. The other day I asked Rhett what music we should listen to and he said Jeff Tweedy (I never met another 2-year-old who requests Wilco. Maybe Laurie Berkner or Raffi...), so I put on a little Summerteeth. After a while Rhett said, "No, mommy. I wanted the one with Nels Cline...the new Wilco." The new album is the only one that Nels Cline plays in. He knows his stuff! Here is a great picture of Tweedy and Cline. 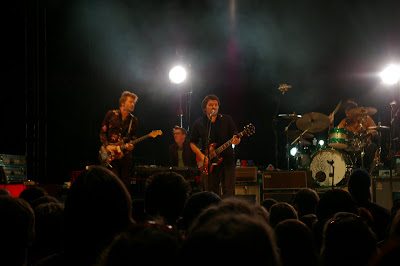 Here is a beautiful picture of Rhett at the beach over the weekend. We went to Pacific City for the weekend with some good ol' Warner friends. We stayed awake later than 10pm every night and enjoyed a ton of adult conversation. We stayed in a great house on a beautiful quiet part of the beach. I hate to say best of all, but best of all, the weather was perfect. You can't ask for anything more at the Oregon Coast. One other thing you need to know about this post...one of our friends will be referred to as J.J. Due to privacy issues he has with the internet. So, once again, look at this beautiful child... 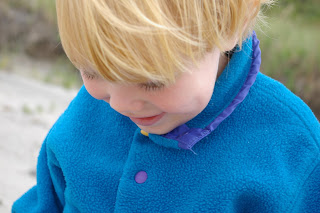 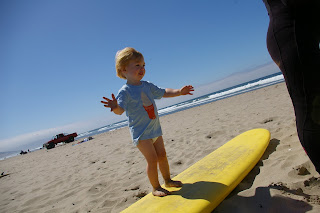 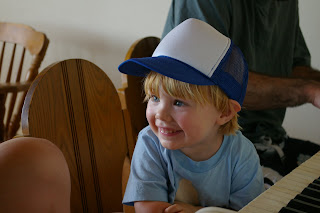 Here is the only family picture we got. It is really hard to take a picture of yourself and have everyone look normal. 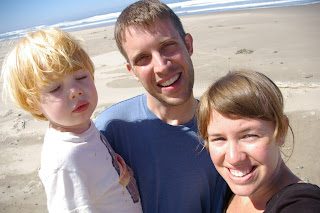 The quintessential beach activity. This ice cream was almost as big as Rhett's head. Good thing he didn't mind sharing with me. 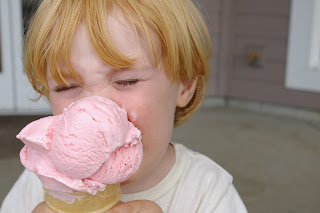 Here is the whole group. Once again, I'm not a angry middle school kid scratching out the face of the mean kid in class.
Is this what you had in mind J.J.? 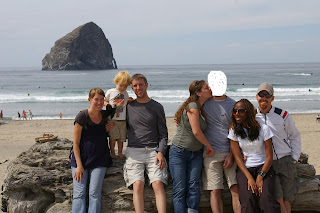 Rhett fell asleep as soon as we hit the road and didn't wake up until we got home. Let me tell you, he was not happy to be home right when he woke up. He wanted to be at the beach house.

Friends, Food, and Fun (yes, the cheesiest title ever) 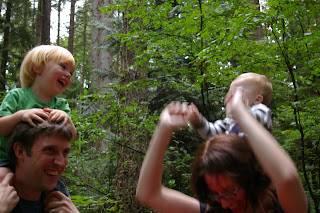 We went to Tryon Creek with our friends, the Rices. Thanks for sharing your anniversary with us guys! 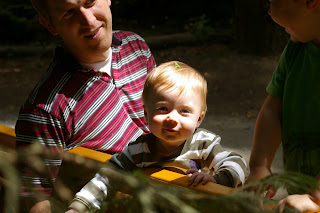 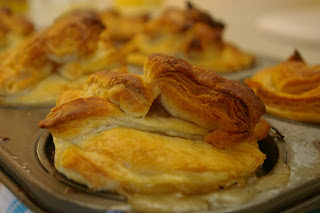 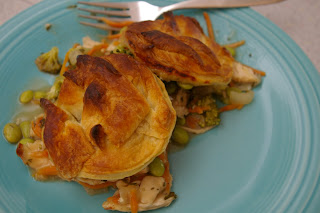 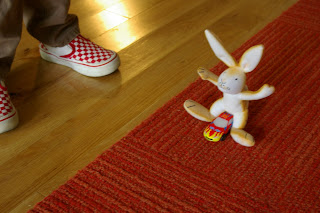 I love how creative Rhett is getting with his playing. Little Nutbrown Hare needed a car and here is what he got. Nutbrown Hare's mommy, snake, used the dinosaur as a car. He still has a hard time playing by himself. But who could resist when you hear him say, "Mommy, will you please play with me."
Posted by Autumn and Dan's family at 1:23 PM 4 comments:

After many weeks of putting it off until next weekend, we finally went camping. Rhett experienced his first sleep in a tent, his first campfire, and his first smore. He loves it all. He woke up in the middle of the night, sat straight up in bed (yes, we had an air mattress) and looked around, then said, "Oh, tent". We only stayed one night and learned a few things for next time. One of those is don't forget the citronella candle. 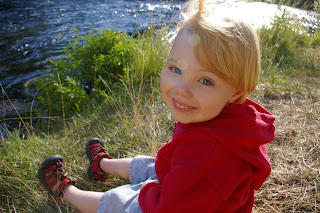 Rhett sitting by the Metolius River. 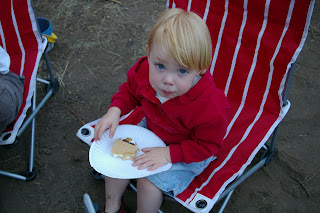 Rhett is a fan of smores. But, who isn't? 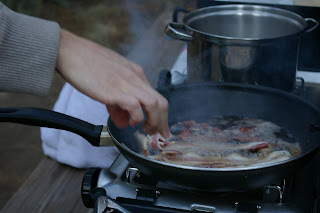 Ahhhh...there is nothing like waking up to a fire and the smell of bacon. 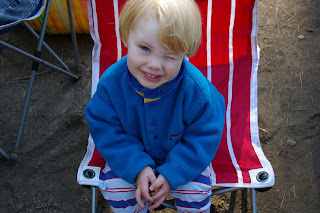 The morning by the fire was my favorite part. 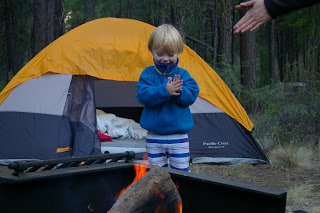 Here is Rhett learning how to warm his hands by the fire. 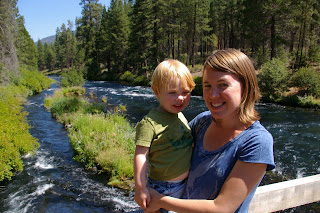 Our last stop near Camp Sherman was the fish hatchery. We saw a ton of trout and had a nice picnic. No, we didn't eat trout for lunch. 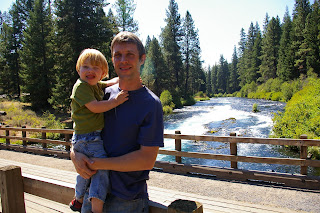 Here is a view of the other half of the bridge. 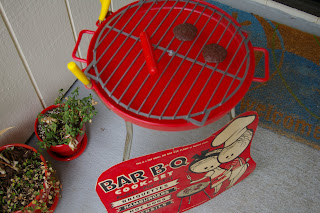 Estate sales can be really interesting...
We went to one today that was full of vintage (and new) toys. We heard that her toys were "no touching toys" for the neighborhood kids. It is a little sad that she spent her whole life collecting these toys only to have a bunch of strangers man-handling them and buying them for pennies. I guess we went to "phase two" of the selling of the toys. The first phase had the rare antique toys. Some of which we hear sold for thousands. Rhett got this cute barbecue set, so he can be Bobby Flay Jr. with Daddy. I just need to make cute hamburger patties for it. 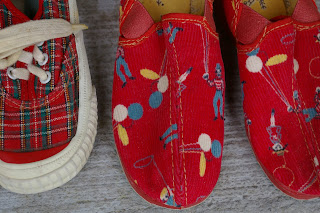 Not only was she a crazy toy lady, but she also had a ton of vintage kids shoes. Here are a couple for the next kid.
Posted by Autumn and Dan's family at 2:39 PM 2 comments:

Rhett and I enjoy surfing YouTube for interesting or funny videos to watch. Sometimes we watch funny commercials (like the Skittles Singing Bunny), and other times it's an entertaining music video. Rhett never seems to tire of watching Captain Bogg and Salty videos! Anyhow, earlier today we were searching for a Sassparilla Jug Band video to watch. They are a great Portland bluegrass band that plays around town. Autumn, Rhett and I first saw them at Last Thursday in April playing in an alley, and we really liked them. So, today on YouTube we found 4 or 5 Sassparilla videos to watch. One of them was filmed on Alberta St. during Last Thursday in April. By now you've probably guessed where I'm heading with this story. We're in the video! It's so random, considering we were only watching them for about 15-20 minutes. And you only see us for a few seconds when the camera pans to the left (no, I'm not the guy juggling). We just thought it was a crazy coincidence, considering how often this band plays around town. It's also nuts that we stumbled upon the video. For all of those who doubted our true love for Sassparilla, here's proof:

Rock On Sassparilla!
Posted by Autumn and Dan's family at 1:10 PM 2 comments: