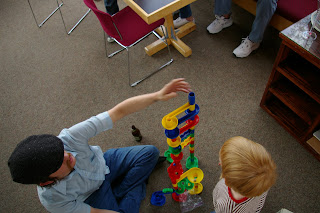 No, Rhett is not a wine-o. This is just apple cider. 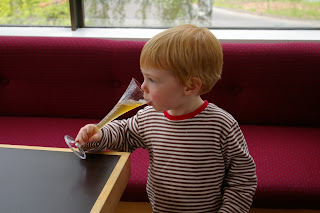 Mimi and Grandad...We have thought of incorporating the name Mimi into our daughters name. Mimi is a common nickname for Ethiopian girls. 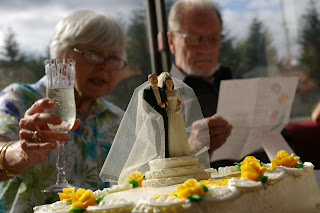 So, I just finished watching the seven seasons of Gilmore Girls. It's ok to admit that, right? I must say, there wasn't enough of that really great actor who plays Morey.
Did you know you can watch the two seasons of Twin Peaks on cbs.com? To pass the time while I cut letters and string banners I'm watching a little of the twisted lives of those who live in Twin Peaks. I forgot how good it was. My last Twin Peaks marathon was in college.
Posted by Autumn and Dan's family at 2:40 PM

no way! you can watch all of twin peaks online for free? that's probably the best thing I've ever heard.

and, watching 7 seasons of GG is nothing to be ashamed of. we watched an entire season in a little over a day once with our friend dave when he came down from seattle (you remember him right). not only was it not shameful, it was basically perfect. When it's raining outside, take a little trip to Stars Hollow...

Twin Peaks freaks me out! :) Your Grandparents look so cute! Happy 60th to them!

I own all of the Twin Peaks seasons, plus the 2-hour premier episode. I also have several Twin Peaks books, one called "Full of Secrets: Critical Approaches to Twin Peaks" and I've read the whole thing. Embarrassing? Not a bit. I'll take my cherry pie with coffee black as night, thank you very much.

Congratulations to Mimi & Grand Dad. . . 60 years that's great! Mimi sounds great to work in with your "new babies" name. Rhett look very adult sipping his apple cider. Twin Peaks freaked me out also back then, but it was so ground breaking back. I might need to try and catch it again now. Finding the time to waste is the problem for me. . . It was creative though. Take care. Love ME

LISA said...
This comment has been removed by the author.
7:52 PM

Happy Anniversary to your Grandparent's!!!