Our Neighborhood Is The Greatest

Saturday was the Alberta Street Fair. It was great!
We got there just in time for the parade. Sure, it lasted 2 seconds, but it was the most "colorful" parade I have ever seen. These drummers were awesome and Rhett loved it! 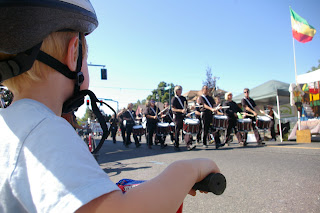 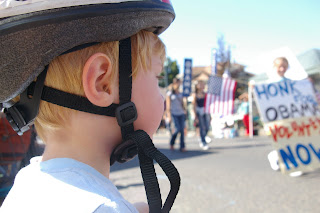 The guy on stilts tried to give Rhett a "five", but Rhett couldn't reach... 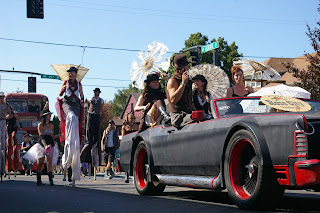 Rhett practiced his bike skills and earned his first cotton candy ever. When it was being made he thought it looked like the "fluff" he sees me making baby dolls with...he was a little confused. Um, he sort of liked his cotton candy though. 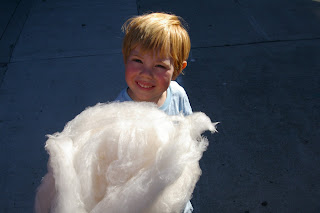 Then came the entertainment. There were some fun bands and this street performer. He was crazy and weird and we couldn't take our eyes off him. Rhett was stunned and entertained at the same time. 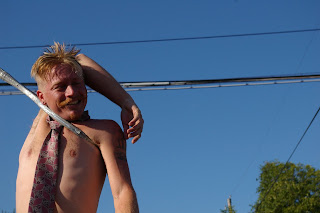 Yes, he fit his whole body through this tennis racket. 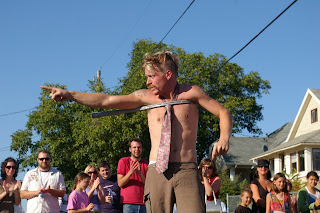 Rhett was very concerned about this trick, because the performer kept saying how dangerous it was. Rhett said, "I don't like to watch dangerous things."
He took the money out of a bear trap with his mouth...hum, interesting. 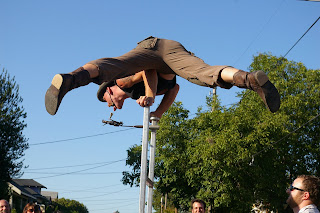 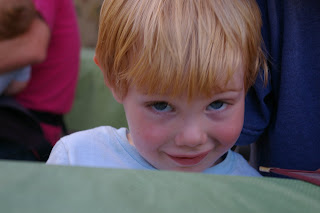 I love Rhett's honest pronouncements, like not liking to watch anything dangerous. What an amazing boy you have.

Correction: I believe that Rhett's first taste of cotton candy was when he was just a few months old, while we were watching Goonies at the outdoor park in Wilsonville.

Didn't you get mad at Dan for giving him a few little tastes?

i am bummed that we just missed you guys at the fair. i think elliot is more bummed than me though. lets get these pre-schoolers together soon.

I love Rhett's sweet picture at the end! Very cute!

Did you get on the right Yahoo group? Just want to make sure b/c there were a few different ones started but we're trying to get everyone on one! :)

Week 22 . . . but who's counting? The Parade looked like pure Portland entertainment. Did Rhett really eat ALL that cotton candy? I'm sure he had help. I'm sure Rhett loved the drummer band. . . less dangerous then playing with a bear trap!! It really is a great neighborhood and you guys sure take full advantage of it. Love to all!