Rhett announced while playing his drums, "I'm not Rhett. I'm Brett Rex the drummer." Brett and Rex are the two names that others mistake his name for. I thought it was a creative stage name. The best was when he was Brett Rex on the way to his friends birthday party. He said, "I'm not Rhett, I don't know any of these people." 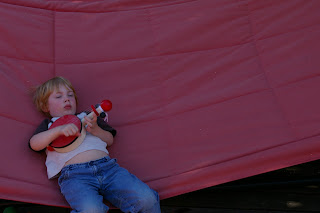 Remember this story? Wait, it has never been on the blog? Well, when Rhett was about 20 months old he loved pointing out all the different instruments in any song he was listening to. Banjo, guitar, drum sticks (for drums), violin, harmonica...
We were in bed listening to Greasy Kids Stuff one morning and Rhett said, "Harmonica!...Like Bob Dylan." We were pretty proud. 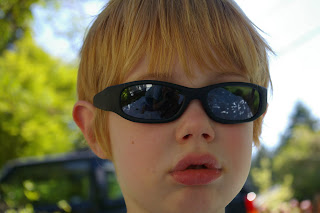 This week at Trader Joe's I reluctantly agreed to let Rhett bring his harmonica in the store. By the time we were checking out he had the whole store cheering for him...or maybe cheering that we were leaving. The funny thing is that he had no idea they were cheering for him...he was in his Brett Rex zone.
Posted by Autumn and Dan's family at 7:22 AM

I'm a big Brett Rex fan already. He is the greatest!

How darn cute is that! Sweetie sweet Rhett.

Your little man is very sweet. It's a very nice age, right?

This kid. I'm telling you what. "Brett Rex." It's a good thing you're writing these down as you go, because there's no way you could remember this many dandies.

I love it! When he famous, I am going to say that met Brett Rex back when :)

Glad I didn't post here until I saw "Brett Rex" in person. . . He is worthy of a stage name. Amazing on the guitar and singing his tunes and very cool in his "Foster Grants". Soon to be a talented singer-song writer. Love him. . . by any name.