A little back story on this meeting...
April and I became acquainted online while we both were waiting for our referrals for our daughters. She is my first cyber friend. There were very few people who knew how I was feeling while I waited for our referral, but I had April. To have someone in the same place in the adoption process is huge. We also used the same agency and when we went to pick up Mezmur we learned that Mez and Zora also had each other. They were in the same room at the House of Hope (our agency transition home/orphanage). This bond of friendship I have for April was formed during a really emotional time in both of our lives...a time where we both really needed a friend who KNEW. It is the same bond we hope for our daughters who were together while they waited for their forever families in their birth country.
April, John, and Zora were able to spend some time with us while they traveled the NW visiting friends and family. We are so blessed to have them in our lives.
Here we are...meeting in person for the first time. 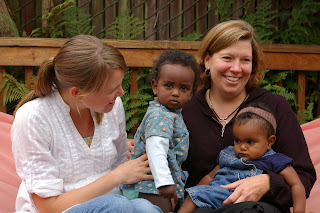 Mezmur really looked into John's soul with her gaze...she approved. 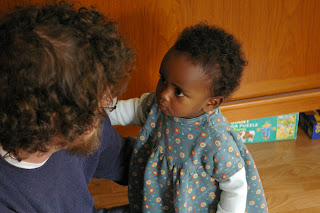 Zora usually greeted Mezmur with a lick...or a kiss...which is also a lick. 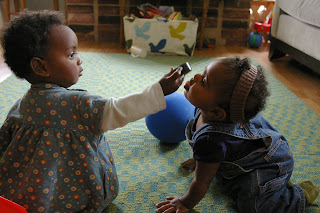 We took them on a little walk to a few of our favorite places. Grasshopper, Bolt...
We were also very lucky to have met April's good friend Becca, who is the local craft celebrity who started Queenbee. 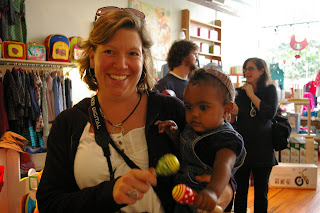 Here are Mez and Zora at Becca and Tony's chicken coop. 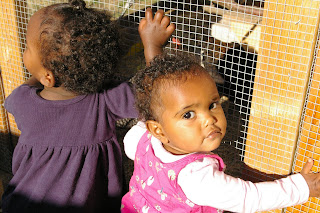 Rhett and April had a corn shucking competition...I believe it was a tie. 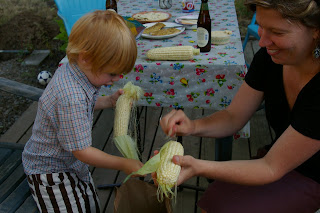 Mez is going to be the one begging for a dog as soon as she can talk. She looooves dogs. Poor Hank was an old fellow. 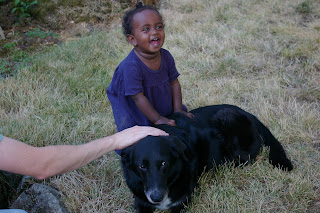 Here is Zora going in for a kiss and Mezmur ready for the receiving. 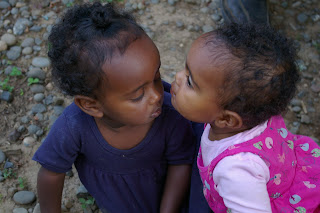 Rhett sure loved Zora. She got some good big brother love this weekend. She looks very happy, doesn't she? 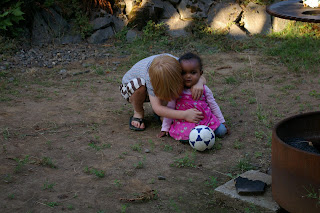 Here we are enjoying a barbecue at Becca and Tony's. 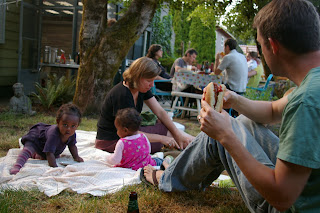 We also got to spend some time at another favorite place of ours...Jamison Square fountain. Here is a good one of the family with one honorary member...checking out John again. 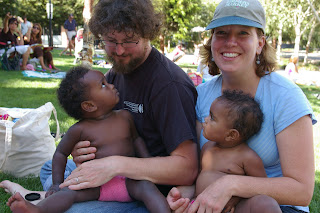 It was sad to say good-bye. We know they will be back next summer, but we hope to see them again before then. 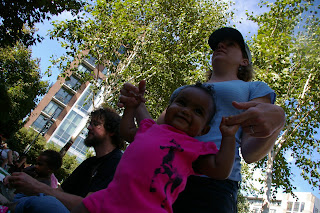 Thanks John and April for coming to our neighborhood...we can't wait for our next visit.
Posted by Autumn and Dan's family at 3:15 PM

Great pics .... how fun!!! How wonderful for both Mez and Zora to have each other, and for Zora to have a big brother, even if for a few days :) ... but mostly how wonderful that you and April 'found' each other and then to have both girls in the same room at the HOH ... this was meant to be for you guys!!! Mez and Zora look sooooo cute together!!!!

These are the most incredible connections to have. So glad you guys have each other! Cool stuff.

Dear Autumn, Dan, Rhett, and Mez-
We had such a WONDERFUL time meeting you and spending time together. I can't wait until we get home to post our pictures. We have some goodies!!! We can't wait until our next get-together.
April, John, and Zora

I'm so glad you've made such special friends. You'll have a lifetime of memories to make.