I don't enter contests...I figure I won't win, because I never win contests. I saw on Facebook a contest. Plywerk, a quirky company based out of Portland, who is revolutionizing how we display photos wrote, "What is the weirdest thing you have seen?" I could have sent him this photo from the Alberta Street Fair...but I thought, no, if you live in Portland you see crazies all the time. (I mean that in the nicest way...I'm a crazy on a good day.) 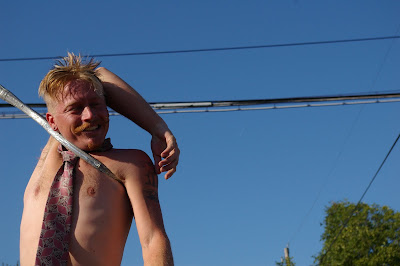 It didn't take me long to remember the photos of the mating slugs I took a couple of years ago. Now, you don't see that everyday. It actually came to me really fast...it WAS really weird. Did you know slugs are hermaphrodites? I didn't, but I could have guessed by looking at the photos. I won't discuss the details of the slugs mating habits...like the fact that one chews off the other's penis when they are done...sorry, I said I won't discuss it. I'll just bring to you the winning photo... 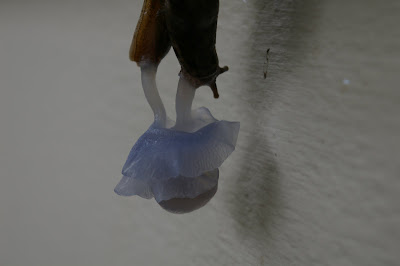 That's right, thanks to slug sex caught on film...I won a prize. Thank you Plywerk.
Posted by Autumn and Dan's family at 7:21 PM

I am disgusted and in awe at the same time. Bravo, Autumn, bravo!

Wow. I am honored to know you!!

That is Animal Planet at it's finest my friend!

I remember this photo in your blog. . . I didn't know it was entered somewhere. Way to go. . . and I guess way to go for at least one of the snails. Sorry I couldn't resist either. AMAZING!