The Birth Of Mavis

Here is the last photo of Mavis on the inside. It is crazy that she is over a week old. Two weeks ago I didn't know who my baby was. Now, we are getting to know her and we are at such peace with our new baby on the outside. 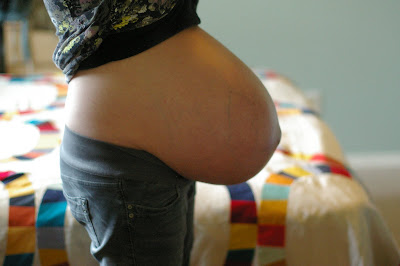 Giving birth is a very personal thing. I debated writing at all about it here, but for the sake of journaling and the hope to empower other pregnant women I decided to write about the birth. 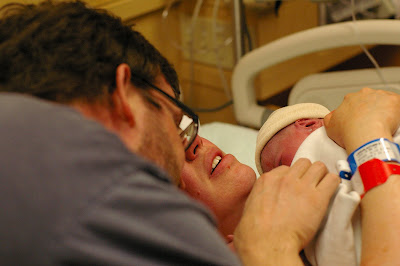 A little back story...my only other birth ended with a Cesarean and being put under general. I was asleep when my baby cried for the first time, I was asleep when a room full of strangers (Dan couldn't be in the room) found out what the sex of my baby was, I was asleep the first time I held my baby, and I was asleep the first time I nursed him. I knew I wanted a different experience this time. Not only did I want to deliver vaginally, but I wanted to do it drug-free. I had a lot of anxiety about the birth. Could I do it drug-free? Is the baby in the right position and not too big this time? I did a lot of reading and research and got empowered more and more with each story. I feel like I had an awesome advantage regarding giving birth. I experienced a lot about birth with Rhett's, where I labored for hours, got pitocin, epidural, and pushed for 3 1/2 hours before the Cesarean. Then, I had Mavis'. All I relied on was my body, which was made for giving birth. It was made for it. The differences between an epidural birth and drug-free birth are huge. HUGE. Yes, one of the differences as lovingly described by Dan is, "You acted like you were possessed by a different person." I even thought that a few times during the delivery...who is that person screaming and cussing? It was like I had no control over how I reacted to the pain. I think it is funny I told my (extremely awesome) doula that I thought I would "go into myself" when I was in pain...completely the opposite happened...and man was my throat soar the next day. The other very noticeable difference was the urge to push. "Urge" is the wrong word to use. It isn't an urge, it is an uncontrollable reaction your body has with every contraction. With an epidural I was able to "sit out" from pushing with some contractions to let my body rest. Without an epidural...there is no stopping the pushing. This absolutely fascinates me. This was proof that a woman's body was made to give birth. Proof. I also know I couldn't push that hard with the epidural. The pushing is so strong without drugs. I strongly believe that if I did it drug free with Rhett I could have pushed him out. I mean, he was crowning...we were so close, but because of the pitocin Rhett's heart was erratic, which is what lead to the Cesarean. I wanted a vbac (vaginal birth after Cesarean). There are many doctors (I hear) that will not support a vbac. I got lucky with my doctor. She was supportive from day one and never forced me to set up a Cesarean date. I heard from many nurses, midwifes, and doctors that the risk is uterine rupture. What do you picture with that description? An explosion. Well, one really great midwife said to me, "It's less of a rupture and more of a split of the scar from your Cesarean." I thought the choice of words is very interesting. When we went on our hospital tour we visited a delivery room. In this room they told us what would happen after you give birth...I started crying. I wanted that birth experience so bad. What I looked forward to the most was the moment I met my baby. I heard about the surge of oxytocin in a drug-free birth when the baby comes out. I wanted to feel that hormone rush. At that moment Dan announced, "We have a Mavis!" Her floppy body was given to me. Every time I think about that moment of holding Mavis for the first time I cry. It was the best feeling I've EVER had. I think I repeated, "My baby!" 100 times. It was such an incredible feeling. I know I got a warm all over feeling when I held Rhett and Mezmur for the first time...I'm sure I cried out, "My baby!" But, it was different with Mavis. The oxytocin did it's job. I was instantly in love with my baby Mavis.

The two main points from this post:
1. Our bodies were made to give birth. Don't let anything get in the way.
2. Vbacs are possible. Don't let anyone tell you otherwise.

ps. blogger was being weird about my paragraphs...hence the weird bold to separate the paragraphs.
Posted by Autumn and Dan's family at 12:17 PM

Awww. I cried a little when I read this. I'm so happy that everything turned out the way you wanted for Mavis' birth. You deserved it! Can't wait to see her squishy cheeks again.

i had tears too. you are awesome mama! really, an inspiration! best babymoon wishes!

a friend of a friend is starting this, if you'd be interested:

Jennifer Peck is the founder of BirthstoryPDX. Since giving birth to her little boy 6 years ago, she has held a vision of gathering mamas together to share their birthstory with expecting mothers as a way to assist the new mamas in making birthchoices inline with their intuitions and values. BirthstoryPDX creates community by gathering mamas and mothers-to-be to share and hear birth stories.

BirthstoryPDX will hold monthly in-person gatherings at Cafe au Play where mothers will share their personal birth stories with an audience of expecting mamas, dads, partners as a means of helping the birthing mother form or solidify their birthing vision. There will also be a corresponding website to promote events, share written birthstories as well as other resources. BirthstoryPDX will launch the website and the first event in May 2011.

BirthstoryPDX is currently inviting mamas who would be willing to share their birthstory either in person or on the website to contact Jennifer Peck at jenpeck76(at)gmail.com.

Autumn!I am so proud of you and happy for you. I am just getting online for the first time in two weeks (but Lori had texted me your news and a photo of Mavis) and I am just over the moon for you. It gives me chills to read your description of the first moments with your baby. I kept repeating "My baby" over and over too. Isn't that such a powerful feeling?

I cannot wait to meet Mavis and hear more about her beautiful birth.

A million hugs to you, my friend.

I never doubted for one moment the results would be what they were. I know I was out of it when you woke me and told me you were on the way to the hospital but my calm was more of a result of where my mind was on how you would do. Knowing you, no other out come would do other than the "right" out come. Life gives us "gifts" at times that go beyond our control, this truly was one of those gifts. This all does not discount you and Dan's part in all of this. You gave the direction and your heart to receive these moments and receive you did in so many ways. I must of been very in tune from the start. I did say she would be a girl from the very beginning and I did guess the name would be "Mavis"(I had a very strong hint giving to me of the name by being around listening to music and knowing you guys). . . so this all explains my calm at 1:00 in the morning and I was blessed to be there before and after the birth. All those moments were a gift for me and will always be remember. . . LOVE TO ALL! ! ! ! ! dad-gramps

your stories are so much like mine with Jude and Indigo, except that Jude's birth ended in a forceps delivery, not a C-section. i was *just* telling someone this morning that the difference in pushing with and without the epidural is night and day. i remember with Ind they said, "quit pushing!" and i said, "I caaaaan't!!!" and she was born. (it's her bday today, actually!). on the other hand, with the epidural, I could not push Jude out on my own.

it's also crazy how different i feel being pregnant and thinking about the labor this time. after jude's birth, i had a lot of fear and anxiety around birth and lacked confidence. after having indigo, i have no fear and actually look forward to the birth of our next child. yes, it's painful, but so worth it! it's an amazing, empowering experience.

Congratulations! She is beautiful. Congrats also on having a v-bac. I wish I would have known more when we had our second...doctors really frown on trying to have a v-bac after 2 c-sections.
Blessings on you and your family. :)

Tears from me too, Autumn, over your story! I am so happy for all of you. What a tremendous part of life.

I hope you don't mind me posting a link to your story. I feel it is so important for moms-to-be to hear this stuff. But if you do mind, I will promptly remove it!