Diarrhea Of A Wimpy Kid

Last summer was the summer that Rhett declared, "I hate reading!" It made me really sad. I so wanted him to curl up under a tree and read! I never forced him to read to us...we just kept reading to him and hoped that one day his mind would change. We knew he could read well, so we didn't feel the need to force it. I bought the game Bananagrams (a game that is a cross between Scrabble and crossword puzzles) and presented it to him as a new game. Little did he know...it was my way to "force" reading. He is really good at that game. One day he asked, "Mom, isn't 'sex' a word?" Why, yes my boy, it is. 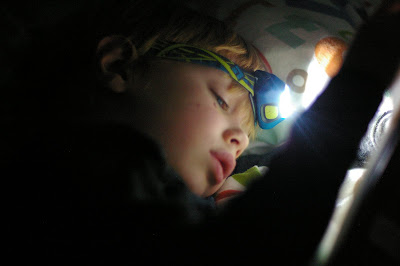 Until one day...a week before Christmas, he says, "Mom, I really want to read Diary Of A Wimpy Kid. ALL my friends read it and I really want to read it." Yes, I could have gotten the book as a Christmas gift and he would have been excited, but he wanted to read! We rushed out and got that book for him! He is reading the second book now. He says he loves reading group at school now, because he can read Diary Of A Wimpy Kid. Now he begs us to stay up a little later, so he can read "just one more day!"

Why Diarrhea Of A Wimpy Kid? That is what Mezmur calls it.
Posted by Autumn and Dan's family at 8:04 AM

Good job, Mom (for running out and getting that book!). That was me as a kid (and still me as a big kid).

Love it! I know so much of the content of those books are above them, but they are so entertaining! Caden also calls them that.