It's a glamorous life we live.
On our way to pick up Rhett at camp...Mezmur ran into the curb with her bike, flew off, and gashed her chin.  The first words out of my mouth were, "Mez!  You need to watch where you're going!"  Then came the blood and screams of pain.  I obviously felt bad for my first words and as I looked at the pink flesh hanging off her chin...I knew it was serious.  We headed right over to urgent care where they said, it was too big of an abrasion for stitches!  Yikes!  It has healed amazingly.  Kids heal so quick and a week and a half later...it is almost healed!  She will likely have a scar, but it will be a story she will tell her friends.  She was so brave the whole time and she got lots of treats and special attention...she loved it! 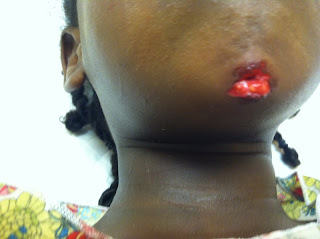 Today is my brother's wedding.  I'm so excited and I hope it all goes down without a hitch.  I made this little cross-stitch for Meredith as a shower gift.  It's still not done...maybe I'll have it finished by their first anniversary. 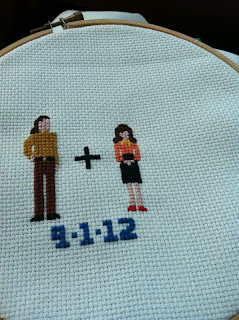 Last night was the rehearsal dinner.  Some family questioned whether or not we should get a babysitter for the kids, but we decided to bring them along.  I figured worst case scenario Rhett was bored and acted out and Mezmur was a pill.  The big kids were great!  Rhett sat and listened to his favorite...Conor Oberst...on his Ipod (my old Ipod) the whole time and Mez flitted around like the party was for her.  I didn't think I would catch my own sweater on fire and that Mavis would puke ALL OVER ME...all before I finished my second glass of wine.  I was COVERED in puke down my dress and on my shoes.  Mavis was fine as soon as she nursed.  We boxed up our dinners and headed home.  And yes, I caught my sweater on fire. 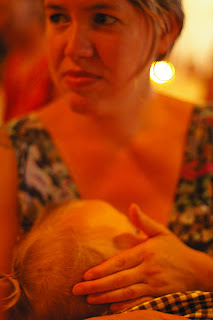 It was really disappointing for Dan and I.  I mean...it's my brother's wedding.  I was so organized for the big kids and their needs and I never would've thought Mavis would puke.  I mean...she has NEVER puked before.  Dan and my anniversary is tomorrow and I'm not even sure we will be able to celebrate it at all.  I know this is a short season...it will pass.  Then...I'll be crying because my kids won't want anything to do with me.
Posted by Autumn and Dan's family at 4:35 PM

That picture of Mezzie's chin makes my stomach do flips.

You look *gorgeous* in the pre-puke wedding photo.

It was amazing how well Mezmur healed from her wound. . . Loved my time with you and the kids. You live a wild "Glamorous" life and I was glad to be on the ride with your family. . . The kids were great at both events, if it wasn't for puking Mavis they would of been perfect. She was a joy to get to know this trip and I think we had a lot of fun together. Until next time, I will have to follow all of the adventures from a far but always near at heart. Love Dad / Gramps