No.  I'm not pregnant.  I just have the largest diastasis ever seen.  So large it "acts like a hernia." 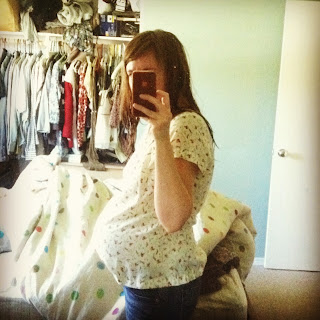 Twenty days from today...it will be gone.  And my body will be replaced with the body I'm supposed to have.  I have to put it like that otherwise...it sounds like I'm pretty vain.  It is a cosmetic surgery after all.  It is "not medically necessary to repair."  Apparently, living with a huge whole in my belly allowing my organs to push forward protected only by a layer of "too thin" tissue is no biggie.  The only pain I get is from standing for too long.  My back starts to hurt and don't even get me started on when my bed mate (Mavis and Dan, but I'm talking about Mavis) kicks me in the stomach!  Yowza.


I feel like the last eight years (It did get much worse after Mavis, but it has been since after Rhett) is just a season of my life and it's about to end! If only the medical field and insurance companies weren't run by men...then, maybe I wouldn't have to pay a crazy amount out of pocket for a necessary surgery.  Yes, half is covered (Which happened with a lot of work and effort from us.), but the other half is a tummy tuck (Which is a very necessary part of the surgery...trust me.) and nowhere in the history of tummy tucks will insurance cover it.  Which doesn't seem fair to someone like me where it is necessary because of a medical issue, but whatevs.  I'm just a lowly woman who chose to have a couple of biological children.
Right now I feel a combination of over the top giddiness and over the top nervousness.  I'm just nervous of the recovery...will it be quick and painless or linger on for months (or even a year as I hear is possible)?
One thing that has been super annoying over this season of my life are all the other woman who say, "That's what I have!"..as I look at their flat stomach.  No.  I am not trying to say I have it worse than anyone else, just that I'm an individual and what I have is unique to only me.  The most fun I've had with this situation was at Dan's work Christmas party.  There was a very pregnant woman who couldn't keep her eyes off of me and all the wine I was drinking.  Ha.
Posted by Autumn and Dan's family at 9:15 AM

You have it worse than anyone else. I think we made that clear with you having the WORST CASE EVER. I'm so excited for you, Autumn. And I'm so sorry you guys have to pay for half of it. How long will you be off your feet post surgery? Anyone setting up a meal train type thing for you?

Keep me posted on this and we will talk soon. . . Love Dad

I'm so excited too. This will be so wonderful for you. And if the recovery is slower or worse than you expected, there are plenty of us nearby to help you heal.

I love your comment about other woman saying they have it too. Then you see their tummy and there is nothing there. You are not alone. I look 6 months or more pregnant. Even had a lady touch my tummy and so oh whats this....I wanted to cry. I would really like to talk to you about your journey with this.